How to setup a matter to bill incrementally as milestones are reached
Updated on January 21, 2021

Milestone billing is a type of flat fee process where an agreed upon amount is charged upon completion of certain tasks or events.

Unlike a traditional flat fee billing, where the full contract amount would be due at the start of the case, milestone billing charges predefined (incremental) amounts at determined intervals (i.e. milestones are reached). The firm will earn these funds as the milestones are reached. The client may either pay these in full upon invoice or pay in installments as determined by the contract.

The firm may have a predefined workflow for the case. Within that workflow, the firm may decide to charge some fixed amount upon completion of a certain task or milestone. This charge can be created manually OR set up to trigger automatically upon the completion of that task. For example, a milestone could be the 'submission of completed packet to USCIS'. This encapsulates the work of the firm to produce the packet and also has the practical benefit of being a work product that can be demonstrated to the client. The firm may set an amount of $1000 to be charged upon completion of that task. When a staff member marks that task complete, they will be prompted that there is a trigger of $1000 and, upon their approval, the system will generate an expense record of that amount.

How to configure a matter to use Milestone Billing

To use milestone billing, set the 'bill type' of the case to [Flat Fee - Milestone]. Then go to the 'Tasks' page of the Matter and review the workflow. If the Case Type of the Matter applied a workflow that included tasks with triggers, then those will already be set for that Matter.

The system will display an icon next to tasks which have a trigger set. You will see this icon as a green ribbon when viewing tasks in the Task Board or as a green dot when in the Task Table view.

If there are new triggers you want to add, then for each task that should trigger a charge you will edit the task record and check off the box 'Trigger Charge' and then set an amount and description of the charge. 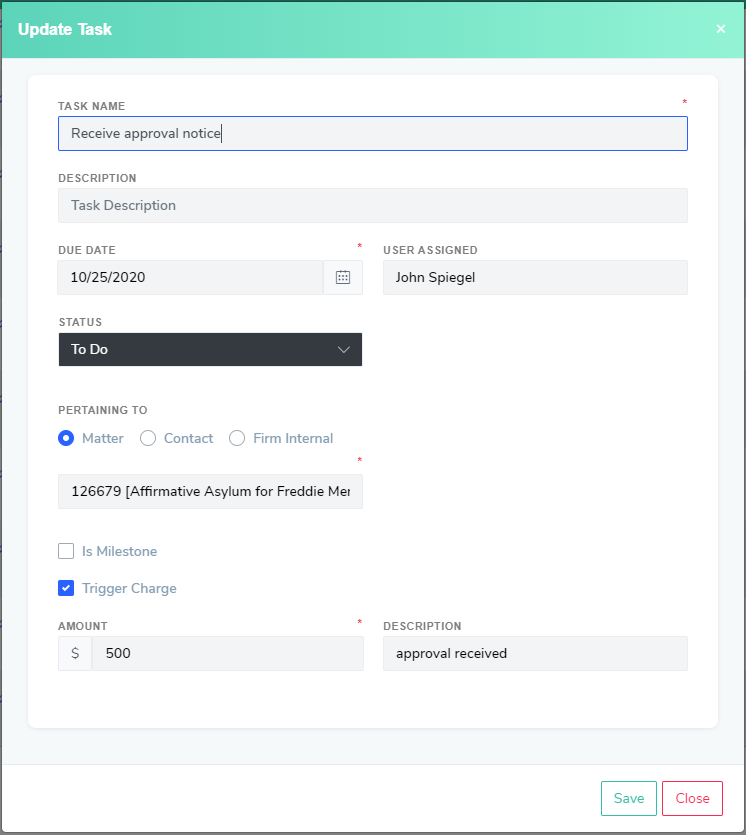 When a task that has a trigger attached to it is marked complete, a confirmation prompt will appear asking if the system should create the charge. If yes, then a charge will be created and linked to the task. The charge can be reviewed under the Time & Expense section of the Matter.

The completed task will show an icon and a tooltip indicating that its trigger has fired and a charge was created.